At a press conference, Koeman explained what he was talking about with Getafe coach José Bordalás after the match. “I warned him that his number 12 player (Nyom) did not treat me with respect and told me something ugly. I will not repeat it, but he insulted me,” said Koeman, who suffered his first competitive defeat since joining Barcelona in August.

Barcelona’s Sergino Dest (back) in a duel with Allan Nyom of Getafe during a Spanish Football League match. Nyom was also supposed to offend Barcelona coach Koeman during the match.

“I told Bordalas that he had to talk to his player, because we cannot accept such behavior in modern football,” added the retired successor Quique Setien.

Bordalas did not see the alleged exit of the Cameroonian representative to the Barcelona coach. “I know him well. He is very competitive, but also very polite. I do not tolerate bad behavior on my players. I doubt Nyom would offend him,” said coach Getafe. 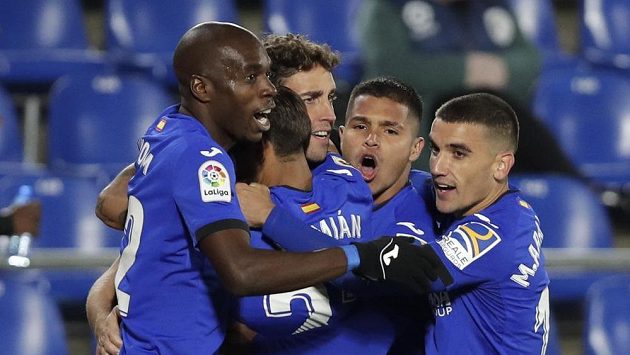 Jaime Mata (center) of Getafe celebrates his penalty goal in a duel with Barcelona together with his teammates.

The match was decided in the 56th minute by Jaime Mat with a converted penalty after a duel by Djené Dakonam with the guest Frenki de Jong. “I don’t know if it was supposed to be a penalty kick. It looked like they were going for him and we swallowed it. I don’t even know if there was a video referee here,” Koeman said.

Referee? Look at the number of fouls and cards dealt

Getafe players have made 20 fouls against Barcelona’s ten. The team from the suburbs of Madrid were penalized with four yellow cards, the guests with three. “I don’t like talking about referees, but if you’ve seen how many fouls they’ve had and how many cards they’ve received, you can make your own picture,” Koeman said.

His charges had almost 73 percent possession of the ball against Getafe, but the result was only seven shots. “We knew it was very bad to play here, but we tried to work with the ball quickly. They kept interrupting our game with fouls,” said the 55-year-old coach.

Barcelona is ninth in the incomplete La League table after four games played with seven points.

Cristiano RONALDO called and after a new positive test SHAKED THE WORLD: This is S * ANJE! (photo)

Modern pentathlon could only last 90 minutes at the Pai Olympics

Gasly will continue to race for AlphaTauri next season in F1

People want to destroy everything, Guardiola dug into the City’s critics

He plays against us, don’t record him, criticized Benzema’s teammates

He plays against us, don’t record him, criticized Benzema’s teammates

Dallas move SHAKES THE WORLD: The wish is clear, you won’t believe what they did in the hunt for the STAR!

Jumbo has a problem on the next Grand Tour. One of the leaders ended the suffering – Cycling – Sports

Cracks in the rows of galaxies: Benzema obviously has enough of Vinicius

Giro d’Italia 2020: How much did Peter Sagan earn?

The resigning president revealed a big secret: Barcelona accepted an invitation to the Super League – News

Van Dijk has to have an operation and he won’t help...

WHO says safety is most important on Johnson & Johnson’s suspension...

El clasico got an UNEXPECTED HERO: The second half MADE A...

The corruption case is escalating. The court also sent Berbra...

Infected Ronaldo said: He advises how to prevent coronavirus

The head of the Pardubice airport will receive severance pay. ...

Grandma does not rule out a lockdown if the restrictions are...

Armenia announces that Azerbaijan has launched a massive offensive in southern...

ABOUT US
Time24 Story is your news, entertainment, music fashion website. We provide you with the latest breaking news and videos straight from the entertainment industry.
Contact us: [email protected]
FOLLOW US
© Time24Story.com